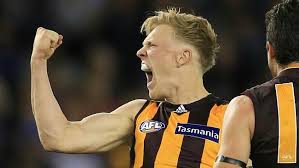 I had a lazy Sunday arvo yesterday. Tress and I had wanted to go watch the Hawks play the Doggies at The Etihad but after a busy Saturday, we decided to watch it on tele and do some chores at home.

But what a match it was. The Doggies have been playing “sexy footy” in the opening 2 rounds and were the form team. The 3-peaters had climbed back off a poor start to Dangerfield infested Cats in the opening round, to win convincingly in round 2, against the West Coast in a repeat of last year’s Grand Final. So it was a mouth watering clash between a slick, speedy contender in red hot form and a colossus of the modern game.

We had walked the little fellow after a big lunch at the Shangri-la Inn, where we had bumped into some old friends – Leng, Linda and Brian. We took him on a long slow walk, catching glimpses of a soccer game between 2 local African looking teams along the way, before coming home just before first bounce at 3.20pm.

The contest proved worthy of the pre match hypes. The Hawks surged early on, leading 32 points at one stage but on half time, the lead was cut down to just 1 point. Then in the third quarter, the Doggies blitzed through to a 19 point lead. I said to Tress sometimes they were so quick it was breathtaking. Like true champions they are however, the mighty Hawks fought for every ball and somehow, Mcevoy managed to fight for a ball, got it to Burgoyne who punted straight down the corridor inside the 50 for Sicily – Ice Man – to make his now signature vertical leap for a mark, 90 seconds before the final siren. Bob Murphy – the very likeable Doggies skipper had twisted his knee (now suspected ruptured ACL) – in trying to context that mark. As he was carried off looking very much in pain, Ice Man kicked the winning goal from 45m – and then held on to a final mark seconds before the end.

Earlier that arvo at the Bellerive Oval in Tassie, the Kangas had just managed to escape with a 5 point victory against the Dees. The Dees had a last chance for a snap goal seconds before the final siren, but the kick went behind.

All that drama… I had been engaged in a facebook Malaysian forum a week ago, trying to ward off suggestions that members in that forum condoned racism. Apparently we hadn’t demonstrated the sort of angst some expected, against adverse experiences of some in the Aboriginal community. These experiences – it was suggested – showed systemic racism and any inaction by members of the forum were hypocritical as criticisms against (often racist) policies of Malaysia were often rife. Those discussions turned at some point into issues of embracing local life. I wondered why no one ever broached the subject of footy and I wondered if most Malaysians still watched soccer, even if the A League was of far inferior standards to the European leagues, which many still stay up at 2/3 am to watch.

Maybe it was because United had fizzled away into a has been. Maybe the 3-o thrashing by Spurs overnight contributed to my dwindling passion for soccer. But I still watch games – via EPL on Demand on Foxtel – just not live ones, because it has become near impossible to stay up late for these games and still go to work the next day with a clear head. I had started following AFL a lot more closely some years ago, when Sir Alex was still ruling the EPL roost. Back in 2008, Ronaldo and Co had just steered United to the great European arenas, when I watched with utter delight, Crawford bellowing “that’s what I’m talking about” into the microphone during the medal ceremony, after defeating the Cats in the 2008 Grand Final. So while United was at the pinnacle, I had started switching codes. It’s probably due to context. It’s much easier to follow games when it’s on Friday night, Sat arvo, Sunday arvo etc… and easier to access when it’s at the G, as opposed to the Nou Camp in Barcelona…

So why Malaysians who have been here for the longest time still watch soccer more then AFL, will remain an interesting question for me and I wonder if I’d ask the question on that forum some time soon…